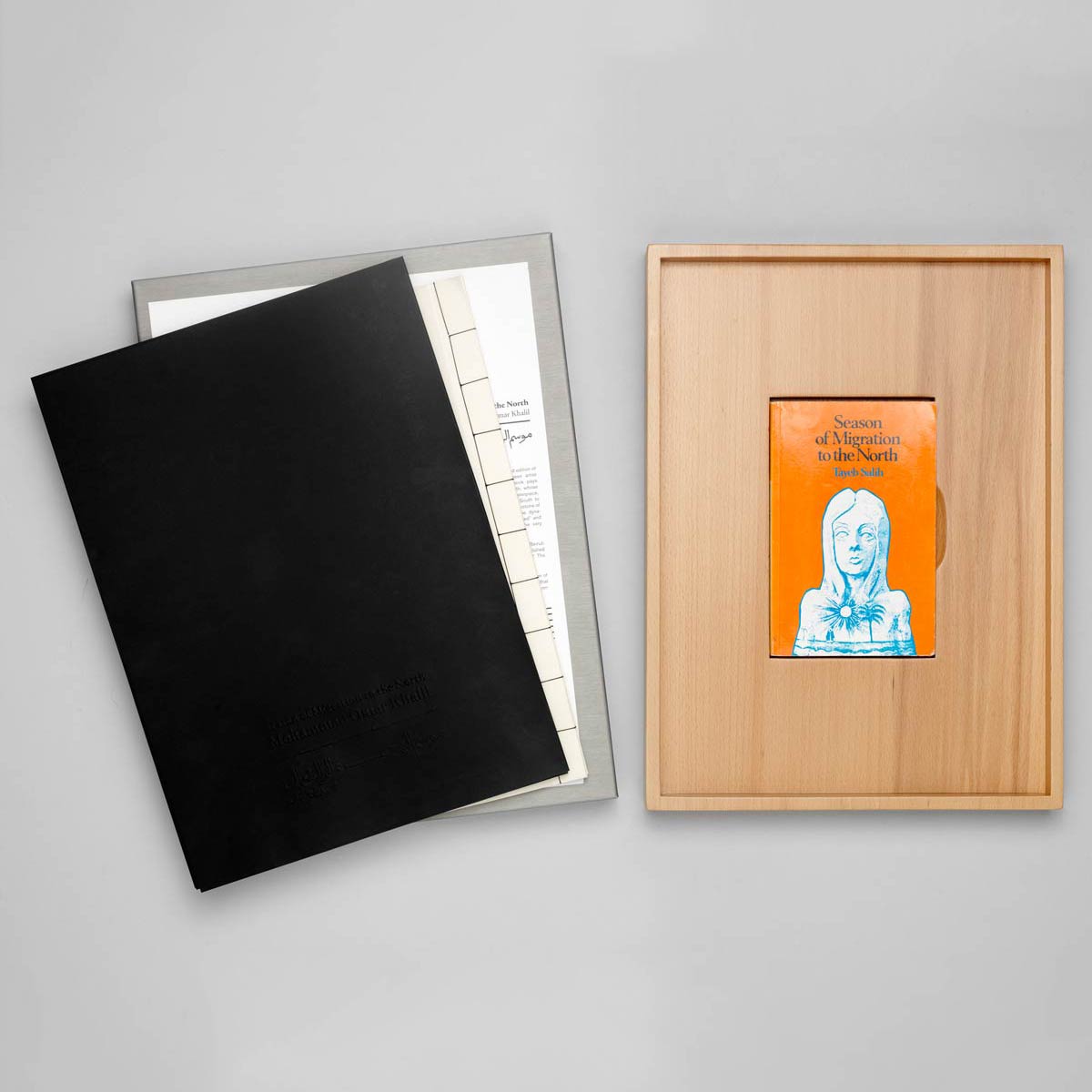 Handmade box made of beech wood and matte grey zinc, numbered and engraved with the artist’s initials 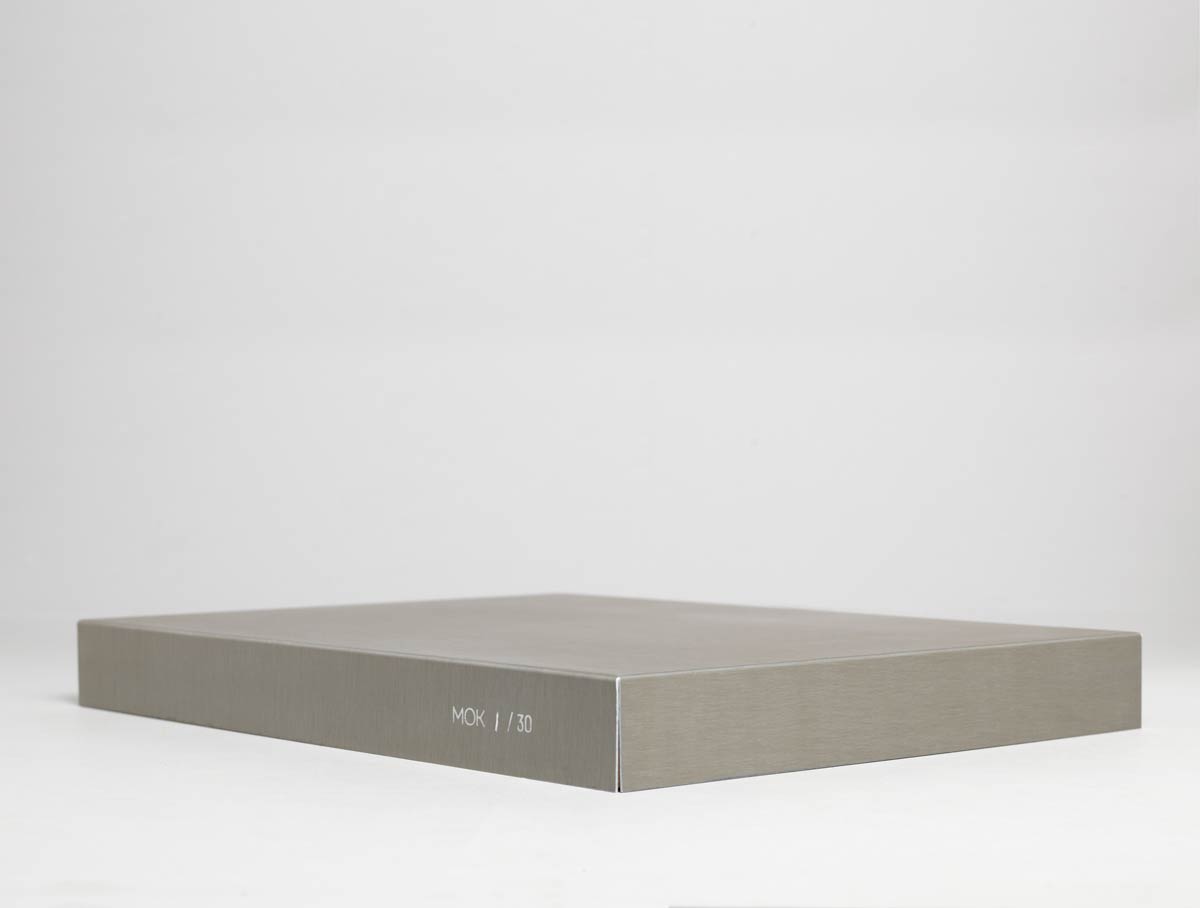 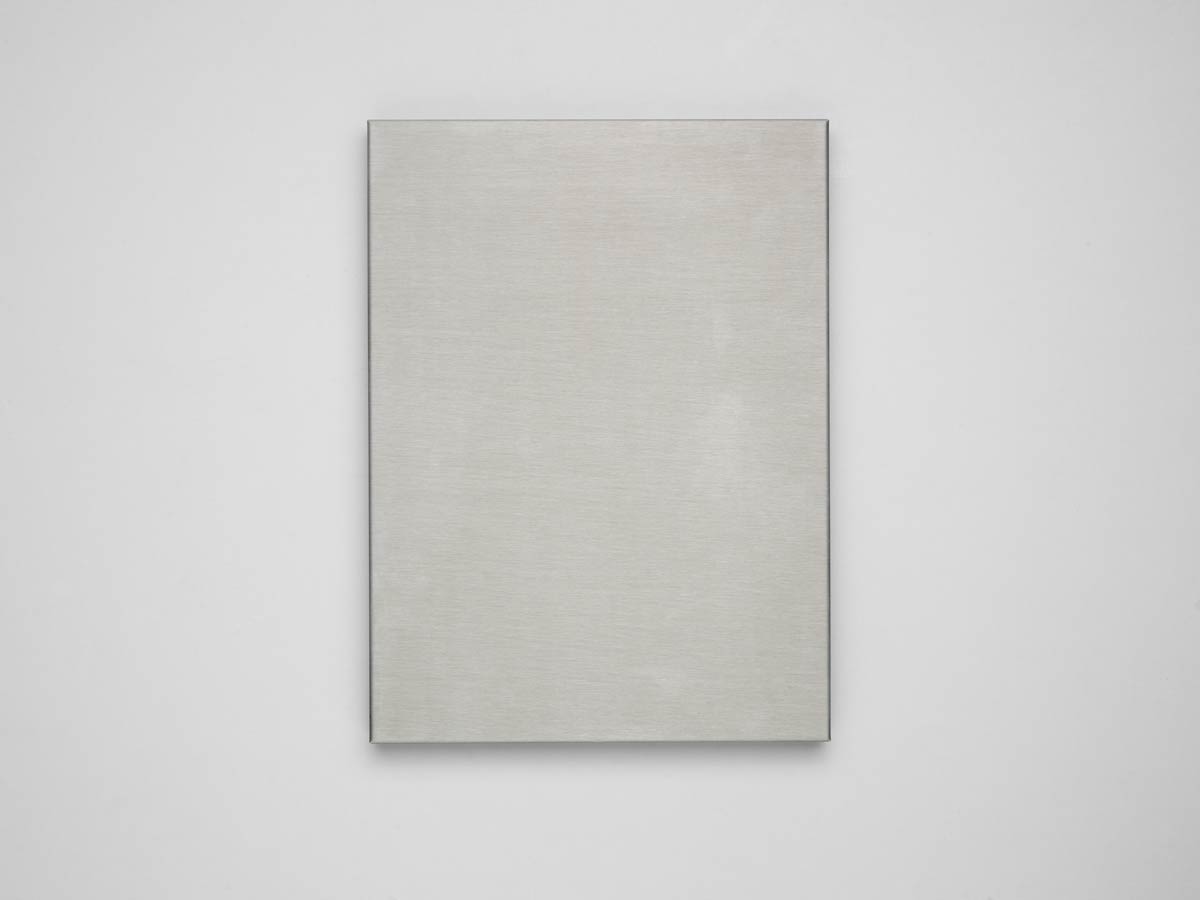 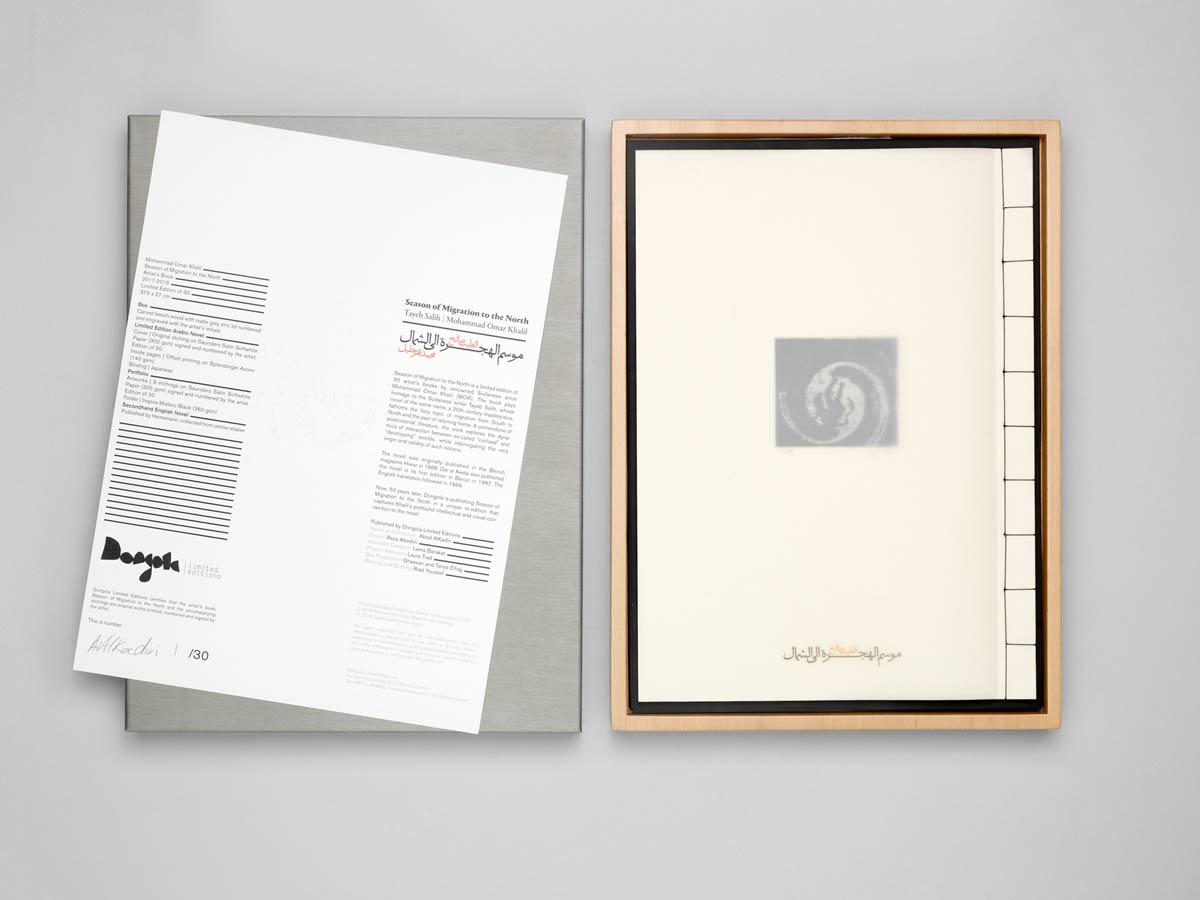 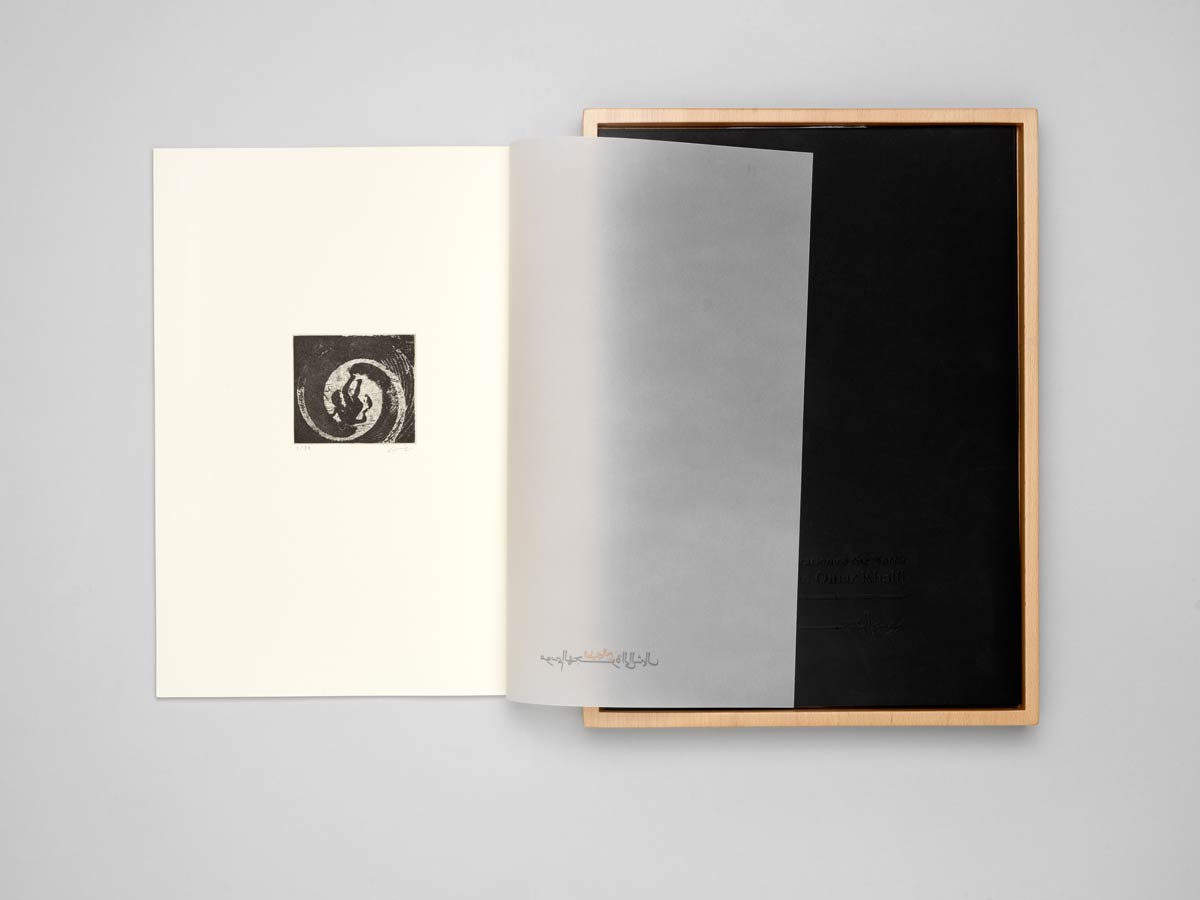 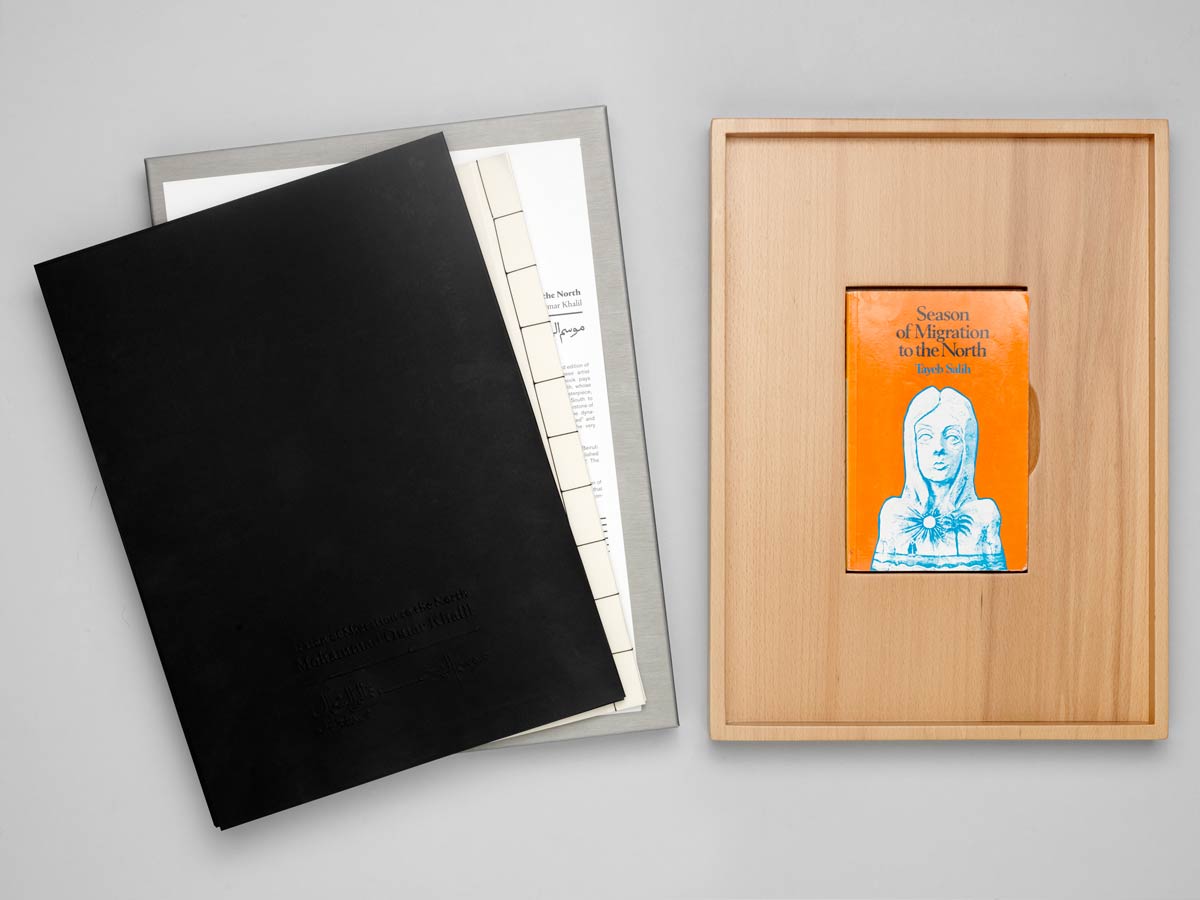 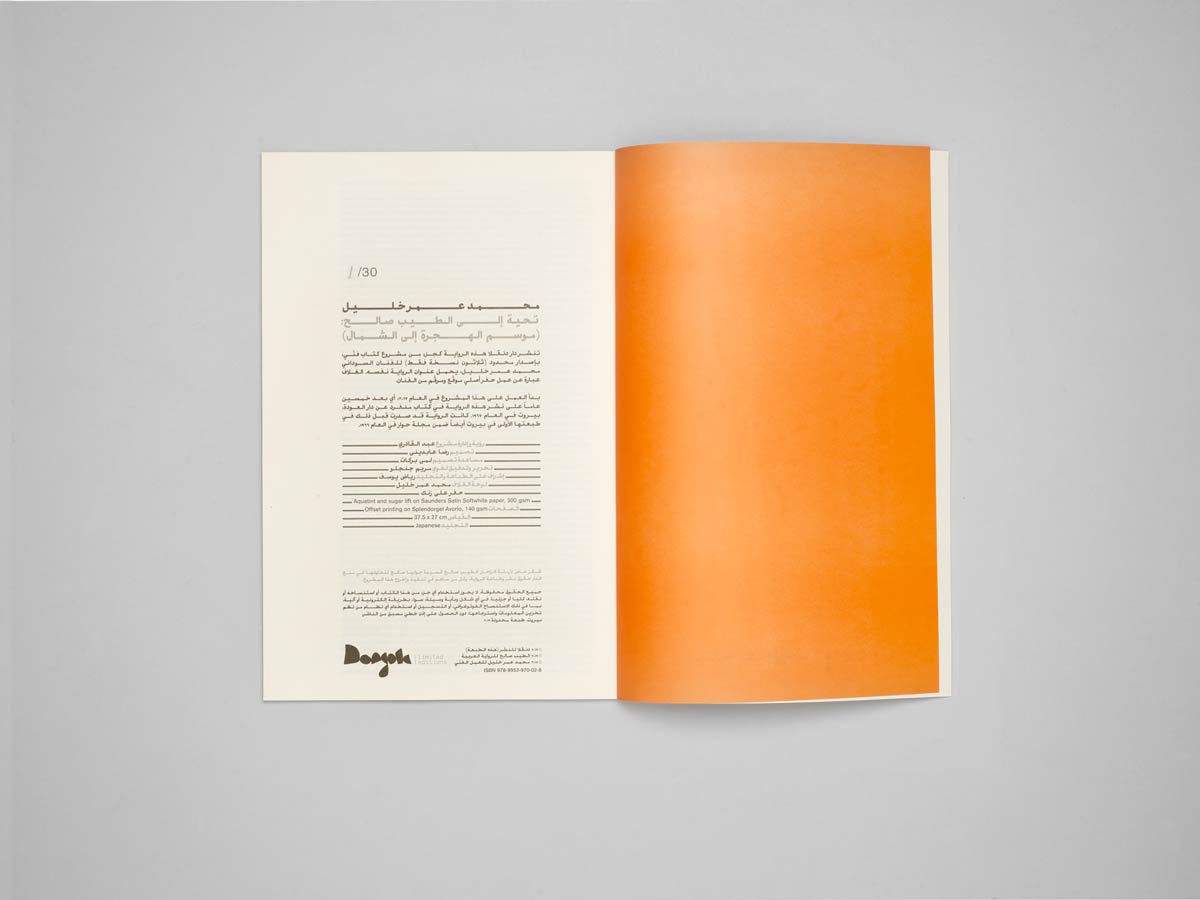 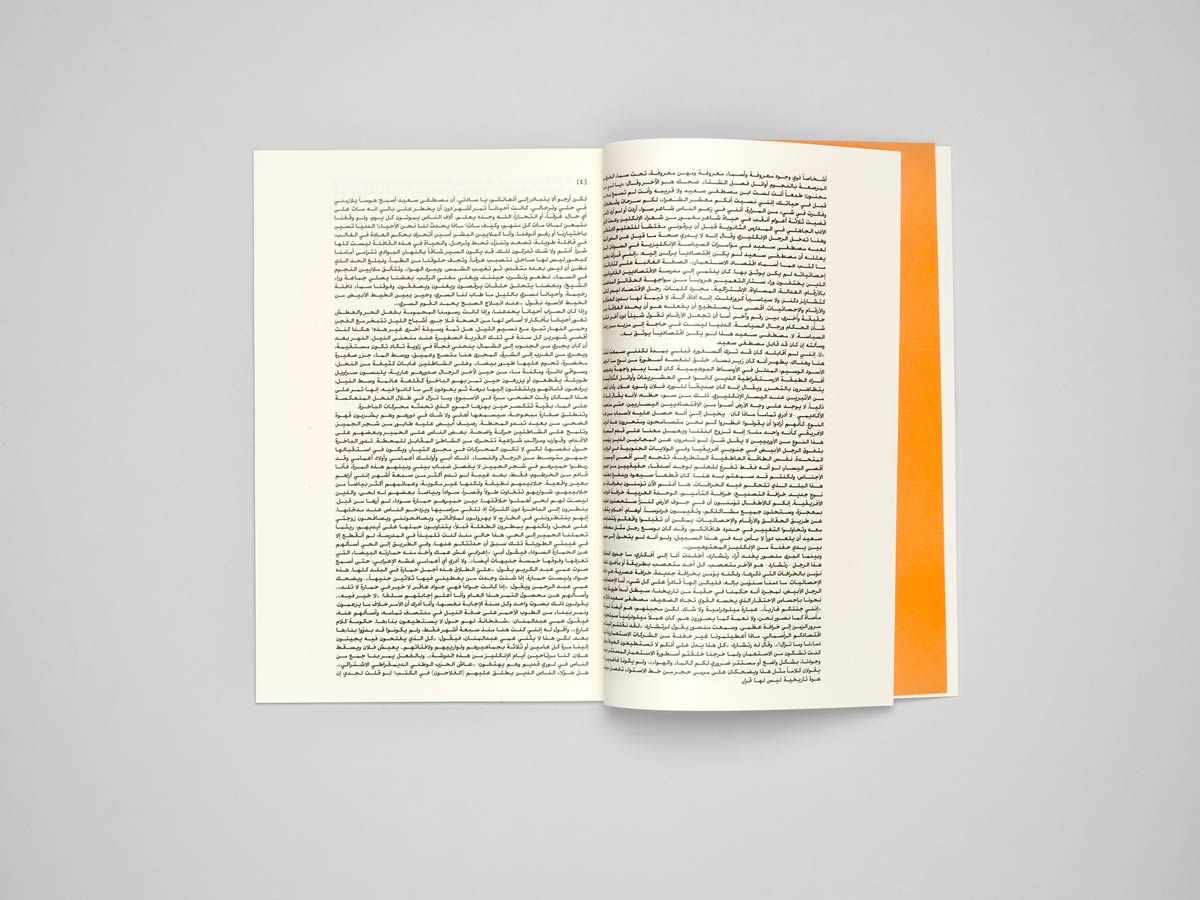 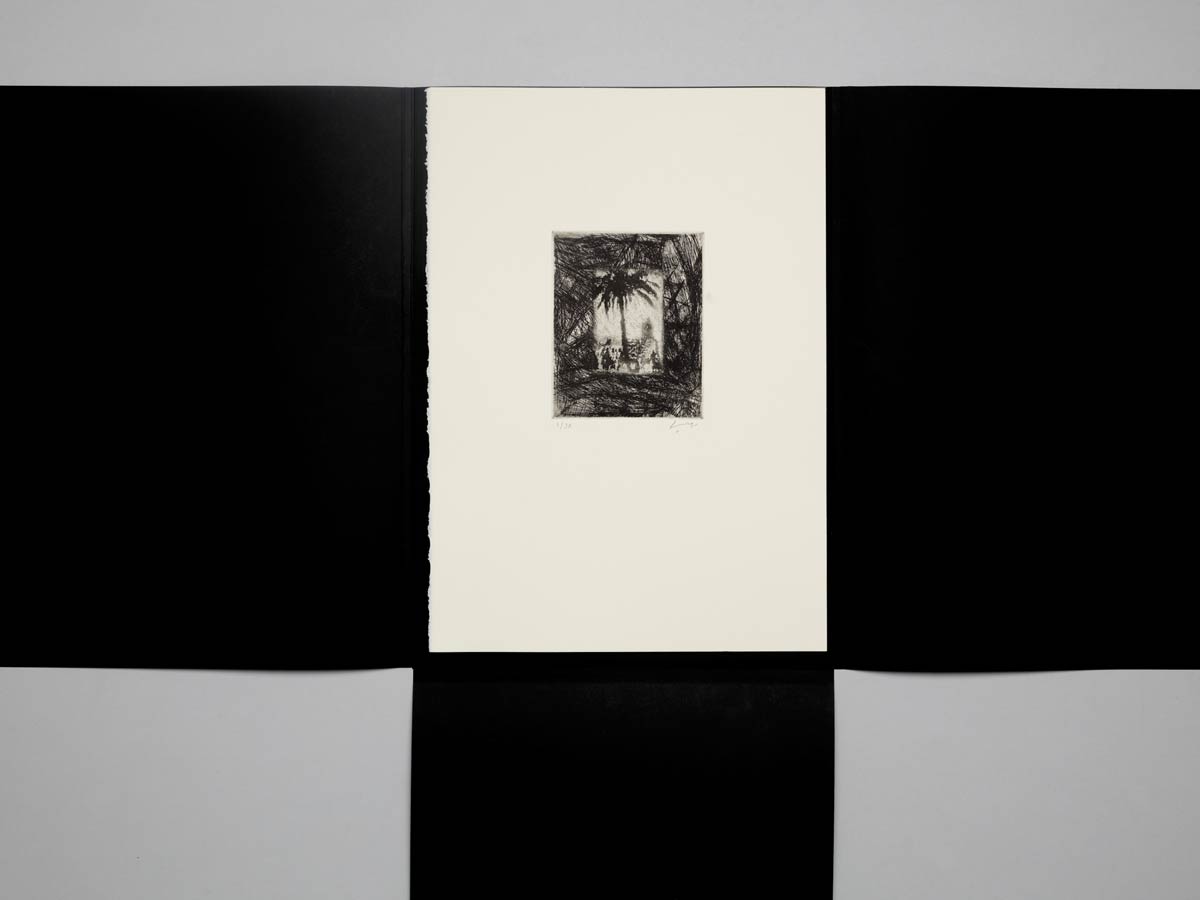 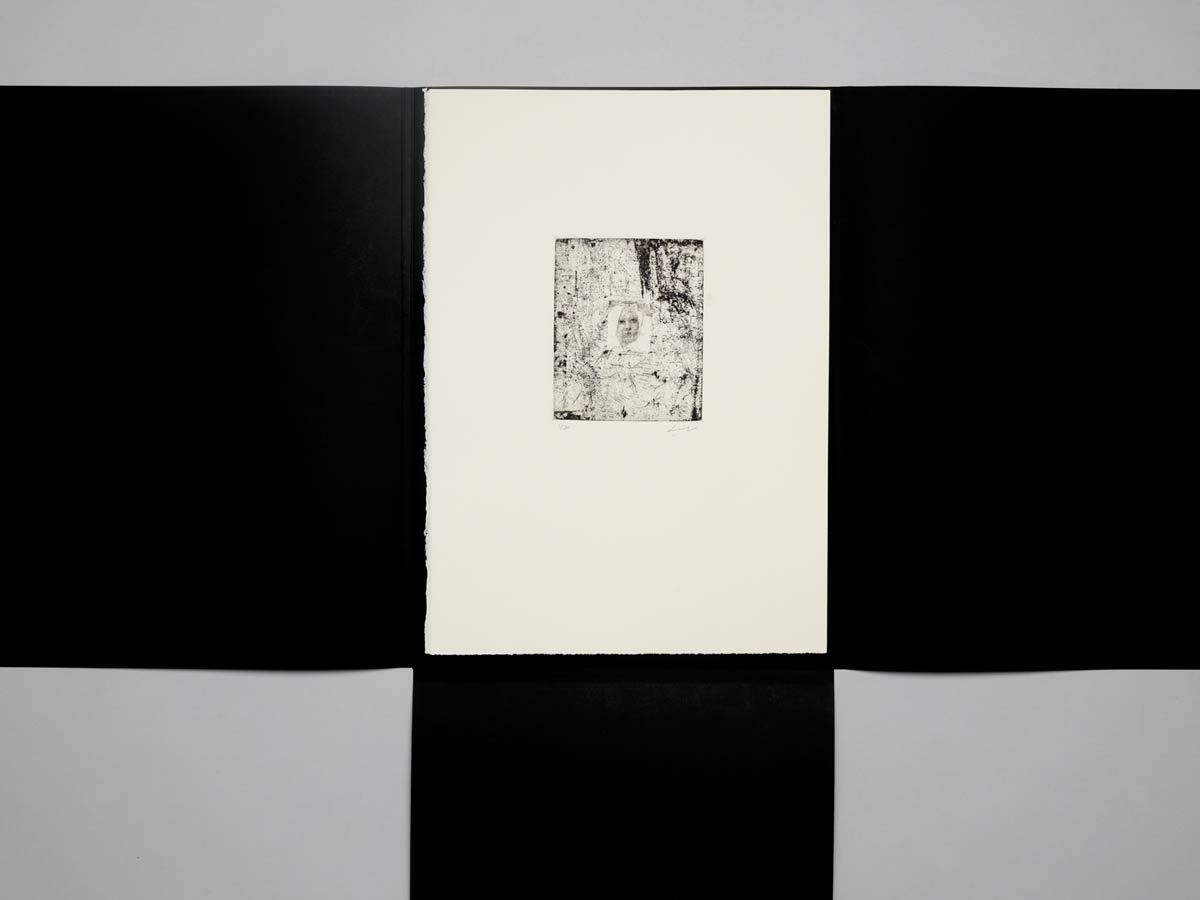 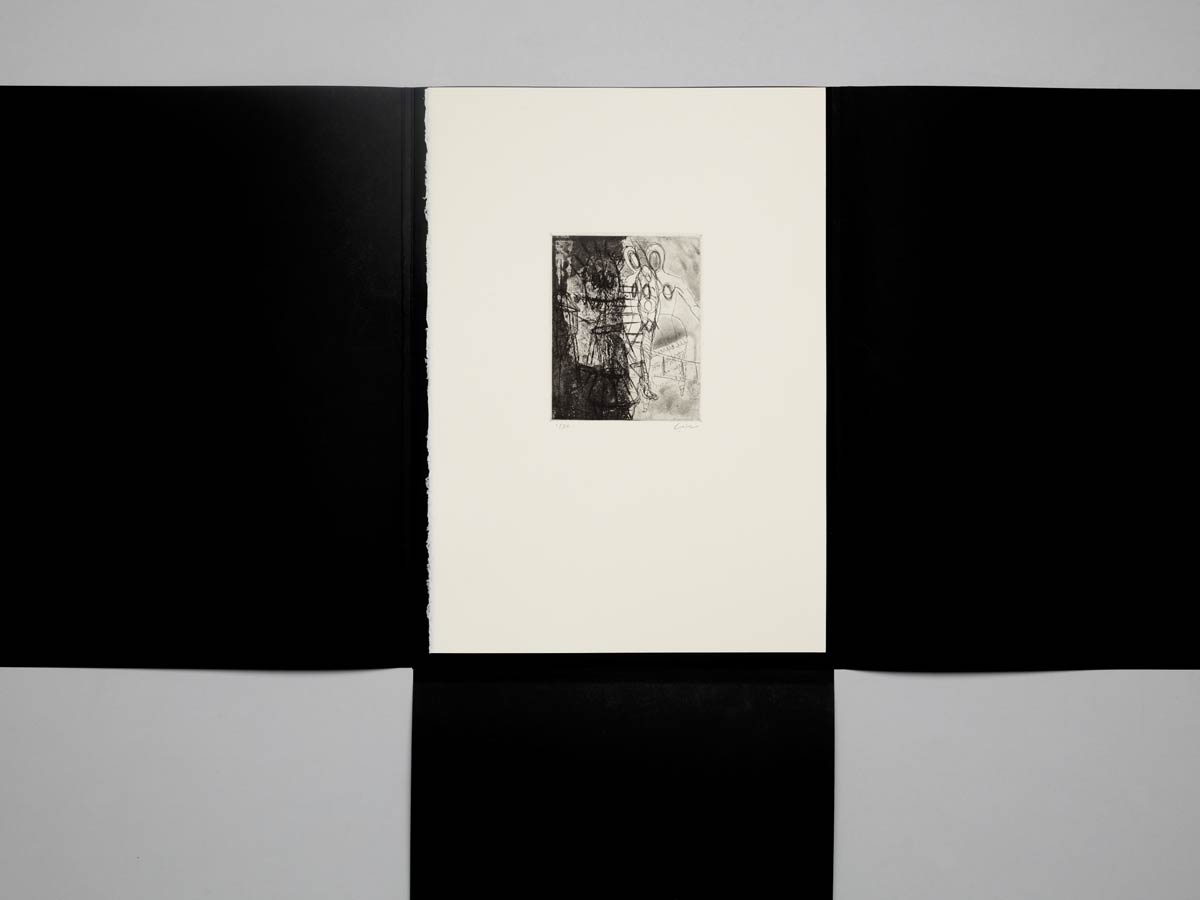 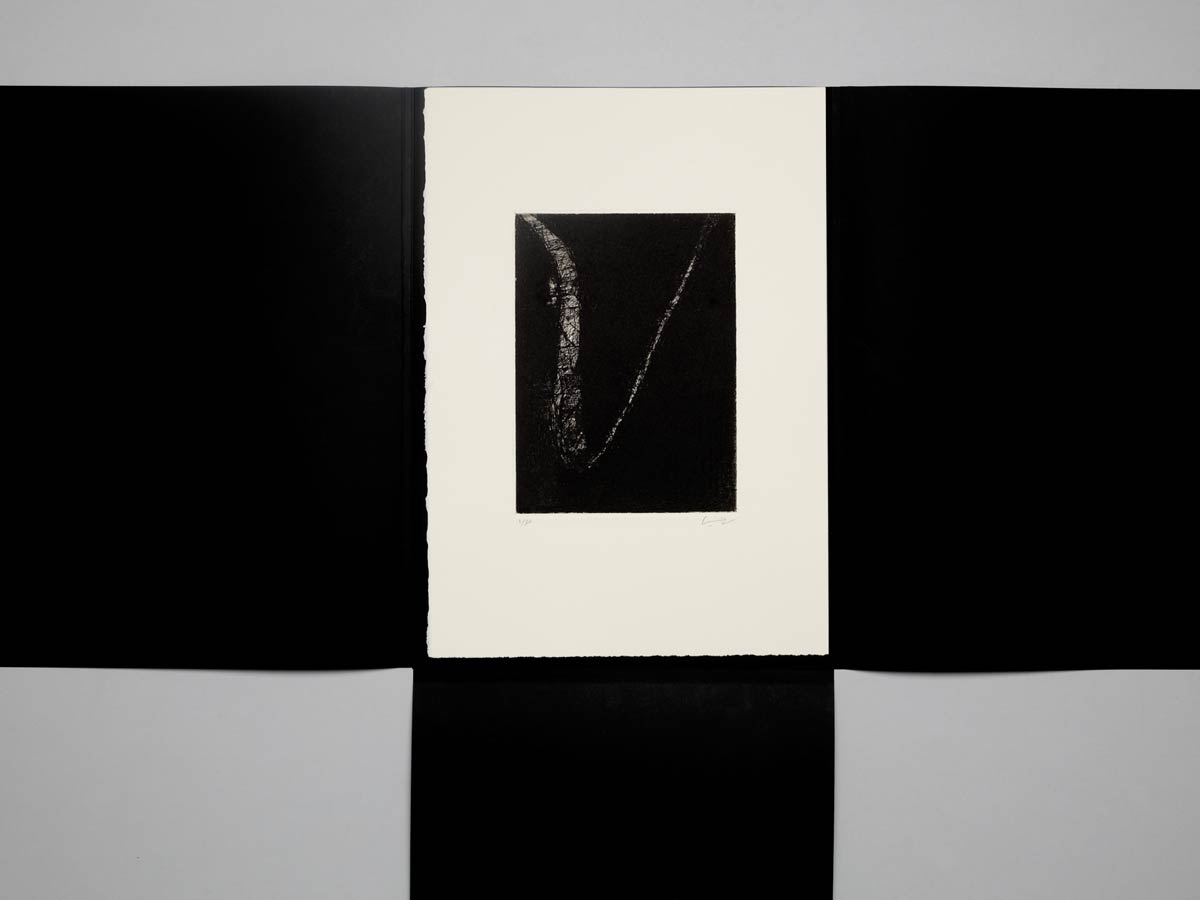 Season of Migration To The North
Mohammad Omar Khalil

Season of Migration to the North by Mohammad Omar Khalil is a limited edition of 30 artist’s books. The book pays homage to the Sudanese writer Tayeb Salih, whose novel of the same name explores the topic of migration from South to North and the pain of returning home. A cornerstone of postcolonial literature, the work explores the dynamics of interaction between so-called “civilized” and “developing” worlds, while interrogating the very origin and validity of such notions.

The novel was originally published in the Beiruti magazine Hiwar in 1966. Now, 50 years later, Dongola has published Season of Migration to the North in Arabic and English along with 30 limited edition artist prints in a unique re-edition that captures Khalil’s profound emotional and visual connection to the novel.

MOHAMMAD OMAR KHALIL (1936 – ) Born in Khartoum, Sudan, lives and works in New York City since 1967. Khalil is one of the Arab world’s most important contemporary painters, having influenced two generations of regional artists. His work, spanning over forty years, across painting and print-making, is in a privileged position between the canon of modern Arab art and the artist’s ground-breaking practice, searching for a dialogue between dissimilar cultures. Profoundly influenced by his travels throughout the Middle East – in particular Morocco and Sudan – and the art history of Europe that he became immersed in during his studies in Italy, Khalil has brought to life a pioneering form of art, in which elements and patterns from tradition merge with pop art and fine prints.His work has been part of numerous solo and group exhibitions in Africa, the Middle East, Europe, Asia and the Americas. The artist’s work is found in different public and private collections, including the Metropolitan Museum of Modern Art, Grenoble Museum in France, the Jordanian National Museum and the Brooklyn Museum of Art.

TAYEB SALIH (1929-2009) Born in Karmakol in the Northern Province of Sudan in 1929. He studied at the University of Khartoum before leaving for the University of London in England. For more than ten years, Salih wrote a weekly column for the London-based Arabic language newspaper al Majalla in which he explored various literary themes. He worked for the BBC’s Arabic Service and later  spent the last 10 years of his working career with UNESCO in Paris  where he held various posts and was UNESCO’s representative in the Arab States of the Persian Golf. After years of success as a diplomat and education advocate, Salih published Season of Migration to the North in 1969. The novel won immediate accolades from critics worldwide, and it remains his most famous book, alongside the novella The Wedding of Zein. His collected works, which include political essays, travel writing, and book reviews, are popular and widely available in Arabic.

Season of Migration To The North Mohammad Omar Khalil, 2019