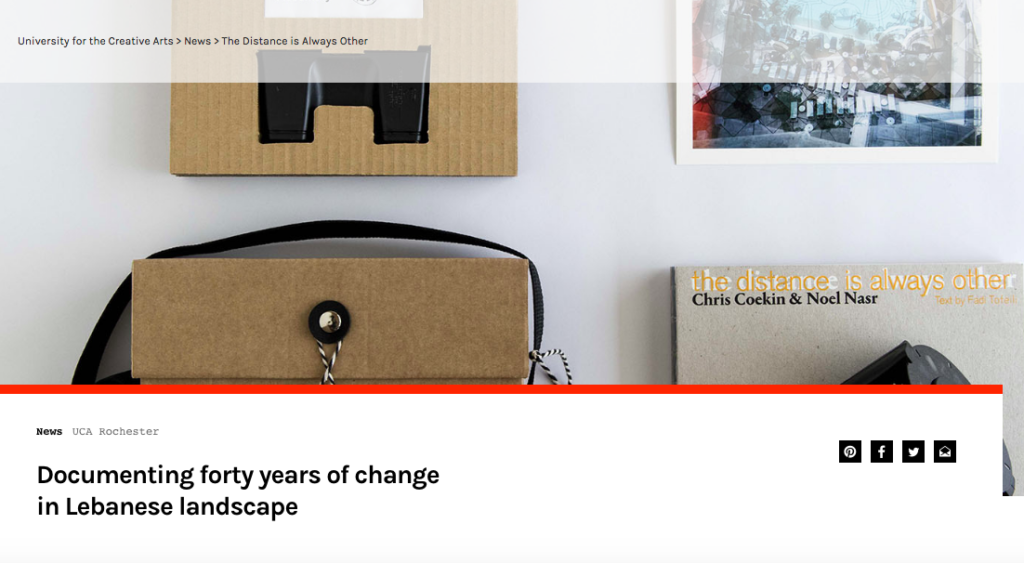 A UCA artist has been documenting the socio-geographic changes in Lebanon that have taken place over the past four decades.

Recreating scenes captured on camera in 1973 by an elderly American couple recording their trip from Beirut to Baalbek, Subject Leader for MA Photography and MA Fashion Photography at UCA Rochester, Chris Coekin, pieced together and recreated the original journey to investigate changes to the region.

Collaborating with Lebanese artist Noel Nasr, and Graphic Designer Reza Abedini, the project’s findings have just been published in the book The Distance is Always Other, and uncover changes in the region’s urban, domestic and social landscape.

“Documenting and examining the changes in the Lebanese landscape, from when it was on the brink of civil war in the original images in the seventies, to the way it looks today was a fascinating project,” Chris said.

“Comparing the new images to the archival ones provided crucial evidence of the social, demographic and architectural changes caused by the war, and the considerable reconstruction that occurred following it. It also highlighted the instability of the landscape.”

The archive was first uncovered by Chris online in 2016, with the original photos taken on a basic stereo camera, producing two images – one just slightly after the other – from the same viewpoint.

“It was important for us to create the same look and feel in the way the shots were taken, so that the true juxtaposition would be in the landscapes,” Chris added. “We mimicked the structure of the stereo film camera by overlaying two photographs of the same object to form a single image.”

The findings were exhibited earlier this year at ArtLab Gallery, Beirut, before being compiled into a limited edition art book.

Chris Coekin’s work is often collaborative, and has been exhibited internationally in institutions and exhibitions such as the FOAM Museum, Amsterdam; People’s History Museum, Manchester; The Photographers’ Gallery, London; and National Industrial Museum of China, Shenyang.

More information on the book, which has been published in conjunction with Dongola Limited Editions, can be found here: www.dongola.com