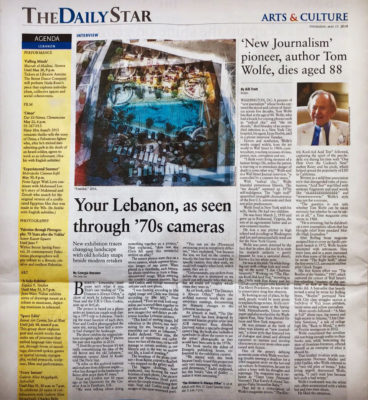 BEIRUT: Lebanon’s landscape isn’t what it was. That’s one reading of “The Distance is Always Other,” a show of work by Lebanon’s Noel Nasr and the U.K.’s Chris Coekin, now up at ArtLab.

The project is based on a photo series an American couple took during a 1973 trip to Lebanon. Tracking the exact location of each shot, Nasr and Coekin photographed the same site, noting how half a century had changed the landscape.

The show exhibits the original pictures alongside eight of the 27 photos the pair shot together in 2016.

“I liked the project because it’s not really romanticizing the idea of the old Beirut and the old Lebanon,” exhibition curator Abed Al Kadiri told The Daily Star.

“It relies on this archival material and explores from different angles … what has changed in the landscape of Beirut after more than 45 years.”

Nasr and Coekin met 10 years ago at the University for the Creative Arts in Farnham, U.K.

“We were talking about doing something together as a project,” Nasr explained, “then one day Chris fell upon this wonderful archive on eBay.”

The source photos were shot on a stereo camera, which captures binocular images of one scene. When placed in a viewfinder, each binocular photo combines to form a three-dimensional image. While retracing the couple’s Lebanon journey, Nasr and Coekin used vintage cameras to reframe each new photo.

“This kind of moving image, [a] vibration in the photos, was fascinating for me, because it really resembles our state as Lebanese,” Kadiri declared. “This state, the amount of transitions and turbulence we face all the time, yet we still manage to remain aesthetic in our lifestyle and in the way we receive our life, is kind of amazing.”

The locations of the photo journey – from Beirut airport to Baalbek – are mapped on the gallery wall.

The biggest challenge, Nasr explained, was locating the exact location of each photo. One picture shows the Phoenicia Hotel pool, where the couple stayed during their visit. Nasr and Coekin took dual images of the now-renovated pool.

“You can see the [Phoenicia] swimming pool is completely different,” Nasr explained, “but because the lens we had on the camera is exactly the lens that was used by the specific camera they shot with, we could tell roughly what level, which room, they are at.

“Unfortunately, any archive from before the war is destroyed so we could not tell exactly who they are, but we could tell roughly which room they were in.”

An art book, titled “The Distance is Always Other,” places the archival material beside the contemporary readings, documenting the dramatic changes to the Lebanese landscape.

An artwork in itself, “The Distance” book has been designed by renowned Iranian graphic artist (and AUB instructor) Reza Abedini. Enclosed within a specially-designed camera bag, the book also includes a viewfinder to allow the viewer to see the artists’ photographs as they would have been seen in the 1970s.

The book marks the debut of Dongola publishing house, co-founded by the exhibition curator.

“We started with this book because I really found this project not only very interesting with multi-layered dimensions,” Kadiri explained, but this book’s “idea of duality … makes it more interesting.”